CRKT states that they were “founded in 1994. From day one, we put innovation and integrity first. We made a commitment to build knives and tools that would inspire and endure. We collaborate with the best designers in the world and operate on a simple principle: that the greatest thing we can give our customers is Confidence in Hand®.”

Currently, Columbia River Knife and Tool company is based in Tualatin, Oregon. The president of the company is Rod Bremer.

This company was founded by Paul Gillespi and Rod Bremer. Both of these men had previously worked for Kershaw Knives, but they wanted to break away to work on their own designs and company aesthetic.

However, the company took about three years to take off and be well-known and recognized. The catalyst for this was at the 1997 Shot Show, which was when they released the K.I.S.S., Keep It Super Simple, knife. This knife was designed by Ed Halligan and was an obvious success. Within only the opening days of the show, the years’ worth of the knife was sold out.

CRKT does not just sell a wide variety of fixed blades and folding knives, they also sell sharpeners, multi-tools, and carrying systems. The company is known for collaborating, especially with custom knife makers. Some of the knife designers that they have collaborated with in the past include Ken Onion, Harold “Kit” Carson, pat Crawford, Allen Elishewitz, Pat Crawford, Liong Mah, Steven James, Greg Lightfoot, Michael Walker, and Tom Veff. Through these collaborations, as well as their own designs, CRKT has come to own fifteen patents and patents pending. These are the things that set CRKT apart from the rest of the modern knife companies.

CRKT has recently just released their line of knives for 2019. One of the new ones that has a lot of promise is the Offbeat II, which is what we will be talking about today. 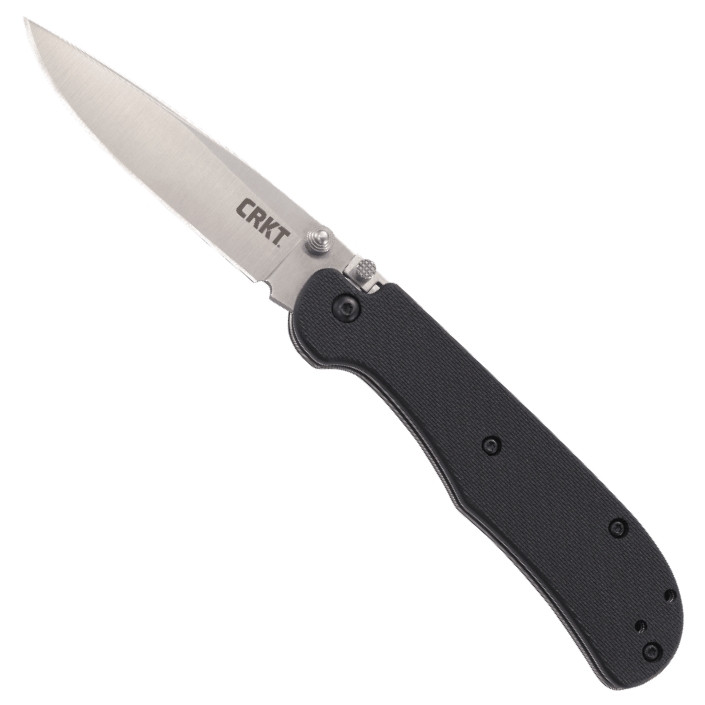 There are actually two men behind this new release: Pat and Wes Crawford. CRKT has a bio for them that states, “The Crawfords know what it’s like to combine old world traditions with new features. Pat, a Knifemakers’ Guild member since 1973, has been a pioneer in the combat folder genre, and was one of the first to use titanium and skeletonize his frames and handles. Wes, his son, has helped integrate exotic field materials including wood, ivory, and stag horn, into their offerings. They’re famous for the CRKT® Triumph N.E.C.K.™— and for pushing each other.” With these men behind this new knife, you know that you are going to get a classy looking knife that works just like the modern ones that you love.

The blade on the Offbeat is made out of 8Cr13MoV, which is a steel that CRKT commonly uses. There are a few major advantages to this steel, as well as a few drawbacks. The first thing that you should know about this steel is that it is a budget steel. This means that it is not designed to be the best in anything. It is not going to compare to the newer steels or super steels that your other knives may have. I don’t want you to get the wrong idea about this steel though, it is enough. It is going to be strong enough, tough enough, and sharp enough to get the job done. However, it is not going to be anything more than just enough.

Of course, there are two places that this steel does excel in. The first is that it is surprisingly incredibly corrosion resistant. This does mean that the Offbeat II is not going to be a high maintenance blade. You will want to make sure the blade is dry before closing it, and you will want to wipe down the blade as well, but other than that, you don’t have to worry too much about it. You also don’t have to get crazy about how clean it is, because it is corrosion resistant.

The next thing that it excels in is the price. This steel is actually a great bang for your buck. It keeps the overall cost of the blade down, but you still get a functional blade.

The blade has been finished with a satin finish, which is pretty typical for the Crawfords. This is because they do like the old-world traditions to shine through when it comes to how their knives look, and the Offbeat II is no exception.

The satin finish is also going to show off the fine lines of the steel, which adds an elegant aesthetic to the blade. Other than that, this is a pretty basic finish that looks great with almost any style of knife or handle material.

The blade has been carved into a classic drop point, which is a blade shape that you cannot go wrong with. The drop point does work to give you everything that you could want out of an EDC such as the Offbeat II.

For starters, the spine of the blade curves slightly from the handle to the tip of the blade. This curve does provide the spine with some extra strength. However, the best thing that it does is creates a lowered point. The lowered point is going to make a big difference for you: it gives you more control. This means that you will be able to perform fine tip work if needed. The other major benefit of the tip is that it is broad. The broadness of it will add a significant amount of strength, so you don’t have to worry about your tip snapping when you are relying heavily on the Offbeat II. The only drawback that the drop point blade shape has does have to do with the tip though: because it is so broad, you are not going to be as capable of piercing with this CRKT. Most people don’t feel like this is a big enough drawback to outweigh all of the benefits that it does provide.

The last major advantage of the drop point blade shape is that the belly is rather large. This means that you are going to have more of the sharp surface area, which will help to make your slicing much easier and smoother. 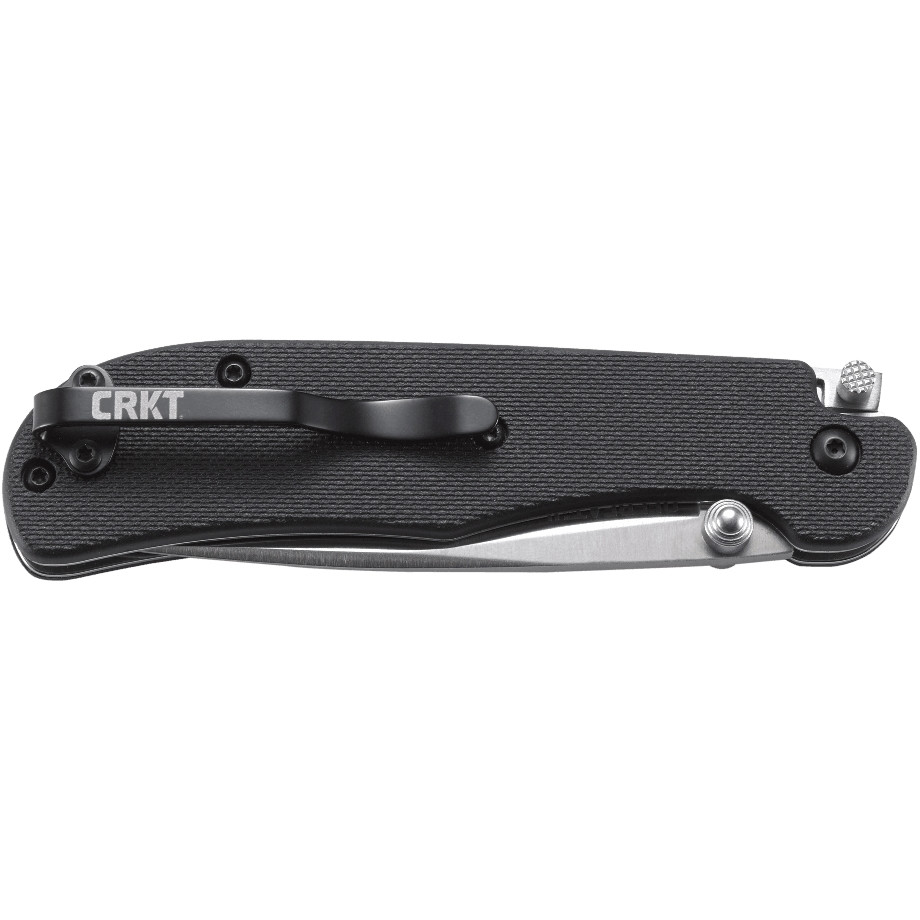 The handle on the Offbeat II is made out of Glass Reinforced Nylon, or GFN. This material is known for being nearly indestructible. It can be this strong and durable because all of the nylon fibers in the material are arranged haphazardly. This means that no matter which direction the material is stressed, it is going to stay together and not break apart. This is a unique characteristic that you are only going to find with GFN.

GFN is also lightweight, which does allow the Offbeat II to stay lightweight, even though it is a longer knife. Also, GFN is inexpensive, which will help to keep the cost of the knife down overall. GFN does have texture applied to it during the creation process, so you should not have to worry about texture and grip when you are relying on the Offbeat II. However, you would be able to find more texture in a material such as G10. The only major drawback si that some people feel that it feels plastic-y or cheap.

The pocket clip on the Offbeat II is not a deep carry clip, but it is larger than you would typically see. This means that it is going to stay more securely inside of your pocket while you move about your day. This is not a necessity, but it is definitely an advantage for this EDC. The clip is skinny and black, which does match the handle. In the middle of the clip, “CRKT” is stamped in light grey.

While the clip can only be attached for tip up carry, it is reversible for either left or right handed carry, which helps to make this knife more ambidextrous. This is definitely an advantage because it allows you to carry the knife in the way that is most comfortable, which also means that it is going to be the way that is safest.

The Offbeat II has been equipped with the Crawford Lockback innovation as well as a thumb stud to assist you in opening the knife.

The Crawford Lockback innovation is the Crawford’s take on the classic Lockback mechanism. The traditional version has the lock bar pinned to the scales of the blade, where it pivots in the middle. This means that the handle puts upward pressure, which pressures the lock bar downward. The pressure is what keeps it secure. However, the Crawfords went in and made it even more secure. With this mechanism, you will never have to worry about the blade closing on your fingers when you are working with this knife.

The thumb stud is one of the most commonly seen opening mechanisms on a folding knife. It is a simple stud that sits near the beginning of the blade. You are going to use your thumb to push against the stud, which will swing the blade open and lock it into place. The thumb stud is easy to use, easy to get the hang of, and is generally regarded as one of the better opening mechanisms.

The blade on the Offbeat II measures in at 3.237 inches long with a blade thickness that measures in at 0.105 inches. The handle and closed length measures in at 4.342 inches long. This creates an overall length of 7.563 inches long when the blade is opened. This is a good, versatile length. It is long enough that you will be able to take on most jobs that you come across. However, it is not so long that you feel like you cannot control the knife either. This is a lighter-weight knife, weighing in at only 3.3 ounces.

When CRKT is discussing this knife, they say, “Bred for action, back for more. Pat Crawford has earned himself a handful of impressive awards over the years, but one unique knife has stood the test of time. Originally designed as a custom in 1979, Pat released the production Offbeat™ in 2017 and now, it’s back again. The Offbeat™ II is another stellar feather in this designer’s cap.

From his shop in West Memphis, Arkansas, Pat has turned out customs that have set a seriously high precedent. That’s not to mention they’re consistently some of our most popular at CRKT®. Now, he’s back at it with the Offbeat™ II.

Before the CNC machine revolutionized our industry, Pat spent an inordinate amount of time cutting handles out of titanium and fitting folders together by hand. So, to expedite the process, he simplified his design. Inspired by a Boy Scout wire handle folder, he invented the Crawford Lockback—an innovation that has proven its worth and is the defining characteristic of the incredibly unique Offbeat™ and Offbeat™ II.

The handle is made with super durable glass-reinforced nylon scales that protect the hidden Crawford Lockback mechanism. As the classic drop point blade is deployed, the cutout slides around the butt end of the blade until it reaches a notch along the backside. Then, it seats snugly into place, effectively locking it. To disengage, push up on the thumb stud and fold it closed.

Conventional? Nope. Utilitarian? All the way.”

This knife is a charmer. It has a traditional look that you aren’t going to go wrong with. That’s not all though—it is also incredibly functional. You can shop all CRKT brand knives here.