Columbia River Knife & Tool, Inc. is an American knife company established in 1994, and currently based in Tualatin, Oregon. CRKT was founded in 1994 by Paul Gillespi and Rod Bremer. Both individuals were formerly employed with Kershaw Knives. The company did not truly take off until the 1997 Shot Show when the K.I.S.S knife was introduced. The small folder designed by Ed Halligan was a success. Within the opening days of the show the years’ worth of the product was sold out. They sold at 4-5 times original production numbers resulting in a tripling of production efforts.

CRKT owns fifteen patents and patents pending. These include the Outburst assist opening mechanism, Lock Back Safety mechanism, and Veff Serrated edges. The Outburst is the company’s proprietary mechanism for their assisted-opening knives. These knives are standard pivot joint liner lock or frame lock folding knife. Inside the knife there is a spring tab that catches the tang of the blade as it is manually opened. Once the blade reaches thirty degrees the spring takes over and quickly snaps the knife open.

The Lock Back Safety mechanism, also invented by Ron Lake, is similar in function to the LAWKS mechanism. It is a lock back folder with a switch that can prevent the locking bar from being depressed. Inside the handle there is a small rod with a flange near the butt of the handle. The other end is connected to a switch near the pivot end. When the switch is pulled back the lock functions as a regular lock back. When the switch is closed the flange on the rod slides under tip of the locking bar at the butt end. This prevents the depression of the bar and the blade form unlocking. Veff-Serrations were developed by Tom Veff, a sharpener and knife maker, and are exclusively licensed to CRKT for production.

Today we will be discussing the CRKT Panache flipper knife, which is a new arrival at BladeOps.

Ken Onion is known as an American award-winning knife maker who is known for being innovative. According to his website, Ken Onion’s goal is designing products that are reliable, over years. He is also one of the youngest to ever be featured in the Blade Magazine hall of fame. This is really the highest distinction that you can receive. He has also won the most Blade Show awards of all knife makers in the world.

The blade on the Panache is made out of CTS-XHP stainless steel. This steel is a great option when you have a knife that is going to need a high-performance steel. This steel is what is known as an alloy, which is just a metal that has been mixed with other metals. This steel is specifically made up of carbon, silicon, nickel, vanadium, manganese, chromium, molybdenum, and iron. 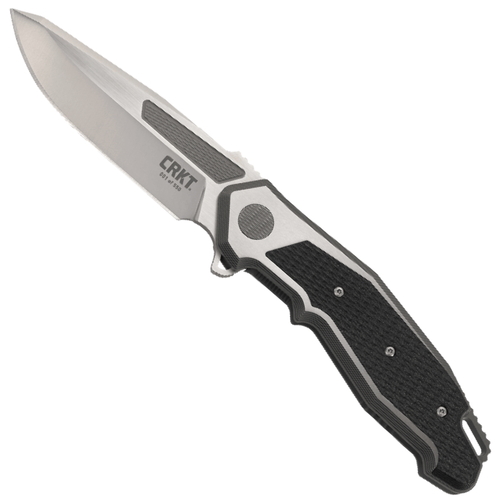 For a stainless steel, it actually has a lot of carbon, which means that it is going to be hard, tough, as well as keep its look for long periods of time. However, the harder the steel gets, the more brittle it is going to be. With this one, we do have a pretty good balance between hardness and toughness, which does allow the blade to take on the toughest of tasks. Just know that the steel might begin to chip in the most extreme of situations.

The blade has been finished with a satin finish. This is the most common finish for a few reasons. It gives a traditional look to the blade without stealing the show. It also looks elegant and classy, which elevates the blade on the Panache. The last reason that it is as popular as the satin finish is, is due to the fac that in terms of luster, it does fall right about in the middle. This means that it is going to cut down on some glares and reflections. Plus, the satin finish does work to increase the corrosion resistance of the blade.

This finish is created when the manufacturer repeatedly sands the blade in one direction with an increasing level of a fine abrasive. This works to showcase the fine lines of the steel while also showing off the bevels of the blade. Through this process, you get the wildly popular and good-looking finish.

The blade on this CRKT has been carved into a modified drop point blade shape. The modifications are mostly with the spine. Instead of a gentle curve, the spine extends straight out, with a slight downward angle until about 7/8ths of the way up the blade. At this point, it angles down much more sharply for the last 1/8th. This does means that you still have het lowered point, which is going to provide you with more control. However, it also means that the tip is not quite as broad as you would typically find on the drop point. This does mean that it is not going to be as sturdy as your standard drop point, but it is still going to be rather strong. Even though this modification does take away some of the durability, it adds in the ability to pierce, which the drop point normally does not have.

The other reasons, possibly the biggest reason, on why this is such a popular blade shape is how large the belly is. The larger belly adds more surface area, which is going to make slicing even easier for you.

There is only one drawback to the drop point blade shape: the broad tip. This is because you do not have as much piercing ability as you would with a clip point. Again though, this drawback is minimized on the Panache because it is a modified drop point.

With the drop point blade shape, you really are prepared for almost anything. There isn’t much that you won’t be able to do with the CRKT Panache.

Titanium differs from aluminum because it actually has a warm feel to it instead of having high conductive properties. This isn’t going to make that big of a difference if you are using this knife in a warm environment. However, if you plan on using this knife in cooler environments, this is a big advantage. Titanium is going to be prone to scratches, which is a drawback.

The titanium does have carbon fiber accents. Carbon fiber is a synthetic material that is made out of thin strands of carbon that have been woven together tightly and then set in a resin. This material is crazy strong, but still lightweight. The thing about carbon fiber is that it is going to be really, really strong in one direction—the direction of the weave. But, when stressed in other directions, it will begin to break apart. When it is stressed in other directions is also when you are going to find that carbon fiber can be rather brittle. Due to the brittleness, you are not going to want to subject this handle to hard or sharp impacts.

The carbon fiber is black on the Panache. It also works to add in the texture that the titanium does not provide you with. The carbon fiber has been roughly texturized, so that you can feel confident with the Panache in almost any environment.

The shape of the handle is edgy. The spine angles upward to about 1/3 of the way, before it angles down toward the butt. This does create a slight point on the spine, which will assist you in your grip. The belly has a squared-off finger groove, followed by a larger belly. Again, these two pieces will work to give you a solid grip while providing comfort.

The handle does have a lanyard hole, which is provide by the piece of metal carved out in a rectangular shape near the butt. This piece of metal is also jimped.

The pocket clip on the Panache is designed for tip up carry only on the traditional side of the handle. The clip is a brighter silver than the rest of the handle, but it does have matching texture like the carbon fiber carved into it.

The drawbacks to the clip are that it is not a deep carry clip and it is not ambidextrous friendly.

This is a flipper knife, which means that it is a manual knife that has been equipped with a flipper. The manual aspect of the Panache is going to help make it legal in more states, cities, and areas than if it were spring assisted or an automatic. The manual aspect of it though will also make it more complicated to open.

The flipper is a small piece of metal that is part of the blade. It extends out of the spine of the knife when the blade has not been deployed. To deploy the blade, you use your index finger to pull back on the flipper, which will swing, or flip, the blade open where it will lock into place, ready for use.

The flipper, like any mechanisms, has some drawbacks and some advantages. The drawback is that it is not as easy to use or get the hang of when compared to a thumb stud. The advantages are larger. First, it is ambidextrous friendly, because you can access it from either side of the blade. This means that you will be able to open it with whatever hand is more comfortable for you. The next advantage is that it is a safer mechanism. This is because with a thumb stud, when the blade begins to swing open, your fingers get caught in the path of the blade. This can lead to some accidental cuts if you aren’t careful. With a flipper, this doesn’t happen, so you don’t have to worry as much as if it were a thumb stud. It also is safer because it enhances the finger guard when the blade is opened.

The blade on this limited run measures in at 3.677 inches long with a handle that measures in at 5.073 inches long. This means that the entire length of the Panache when the blade has been deployed comes in at 8.75 inches long. This is a bit on the longer side, with 7-8 inches being standard for a pocketknife. With the extra length does come some extra weight, with this CRKT knife weighing in at 5.8 ounces.

This limited-edition flipper model features titanium handle scales complete with carbon fiber inlays, a modified drop point style blade in a satin finish and the pocket clip is designed for tip up carry only.

The Panache is another Ken Onion-designed platform that is masterfully constructed with a powerful stepped body and accented with course carbon fiber and a decorative pivot screw design that flows into the blade.

This is a limited run, with only 550 units. It is currently in stock at BladeOps, but there aren’t many left. To secure yours today, click here.