Spyderco was first founded in 1976. The founders of this company are Sal and Gail Glesser. However, they did not start their company solely as a knife making company—they started it to make the first every product: the Tri-Angle Sharpmaker. They sold this product at fairs and trade shows around the United States.

It wasn’t until 1981 when the Glessers settled down in Golden, Colorado. This was also when they introduced the first folding knife that Spyderco produced. There were three hinges about this knife that made it unique. The first was the found hole in the blade, which has now become a classic in the Spyderco knives. The second was a clip on the handle—the pocket clip. The last was the option to have the blade be serrated, which would give increased cutting performance. These three features have since revolution the knife industry and have become the standard in which people seek.

Since then, Spyderco has grown significantly and is now one of the leaders in the industry. Their innovation has earned them an impressive portfolio of patents, trademarks, and industry awards. It has also earned them the trust and loyalty of thousands of people around the world.

Today we will be discussing one of Spyderco’s newest releases for 2019. This is a Sprint Run call the Meerkat V-Toku2. This knife is going to hit BladeOps shelves soon, so keep your eyes peeled for when it does come into stock.

The blade on the Meerkat is V-Toku2 which has a combination of tungsten, vanadium, and chromium. This steel is renowned for its toughness at high hardness, which is a trickier combination to achieve. This is because when a steel gets harder, it does normally lose out on some of its toughness. The harder a steel is, the more brittle it normally is. This is why this combination of characteristics is so unique and such a major advantage.

The Tungsten added to the steel has high strength as well as the ability to withstand high temperatures. The Vanadium is used for rust resistance as well as stabilizing the carbides of the steel, which in turn, makes it easier to work with. This means that even though the steel is incredibly hard, you can still sharpen the steel easily enough. Chromium is an important part of the stainless parts of steel. This bit of it increases the corrosion resistance of it.

The blade on the Meerkat has been finished with a satin finish. This is the most common finish that you are going to find in the cutlery industry. It is so common because it offers such a traditional look to the blade. The finish is created when the steel is sanded in one direction with an increasing level of a fine abrasive; normally a fine sandpaper. This works to show off the fine lines of the steel, which is why it looks so traditional.

Another reason that this blade finish is so classic is because of how it falls in terms of luster. The look is not super shiny or super matte, in fact, it falls pretty directly in the middle of the spectrum. This is classic and traditional.

Lastly, the satin finish is going cut down on some glares and reflections. This is due to the fact that it does have some texture in the look. Also, the finish is going to increase the corrosion resistance of the steel some.

The blade is a dramatically rounded drop point blade. The spine of the knife swoops up before it has a rounded curve toward the tip, which is lowered, or dropped. This dropped point is where the blade shape gets its name from, but it also adds more control when you are using the knife. This is going to be useful on all of the fine detail work that you will be performing with it.

That being said, the point is much broader than you are typically going to find on a knife, even on a drop point knife. This is going to add immense strength to the blade. However, it is also going to take away some of your piercing abelites, because it is not as fine as it could be. This should not be a huge deal, because with how rounded the blade is, you probably wouldn’t be using it for piercing anyways.

The last major advantage that this drop point offers the knife is that the belly is incredibly large. Larger than you would normally find on a drop point or any other blade shape. This is going to make slicing as easy as it can be. The drop point blade is a good blade shape to have because it prepares you for almost any situation that could come your wave.

The blade on the Meerkat has been sharpened into a plain edge. This edge is going to be easier to sharpen and easier to get a fine edge, because you don’t have to worry about the teeth, like you would with a serrated blade. It also prepares you to take on a wider variety of tasks. 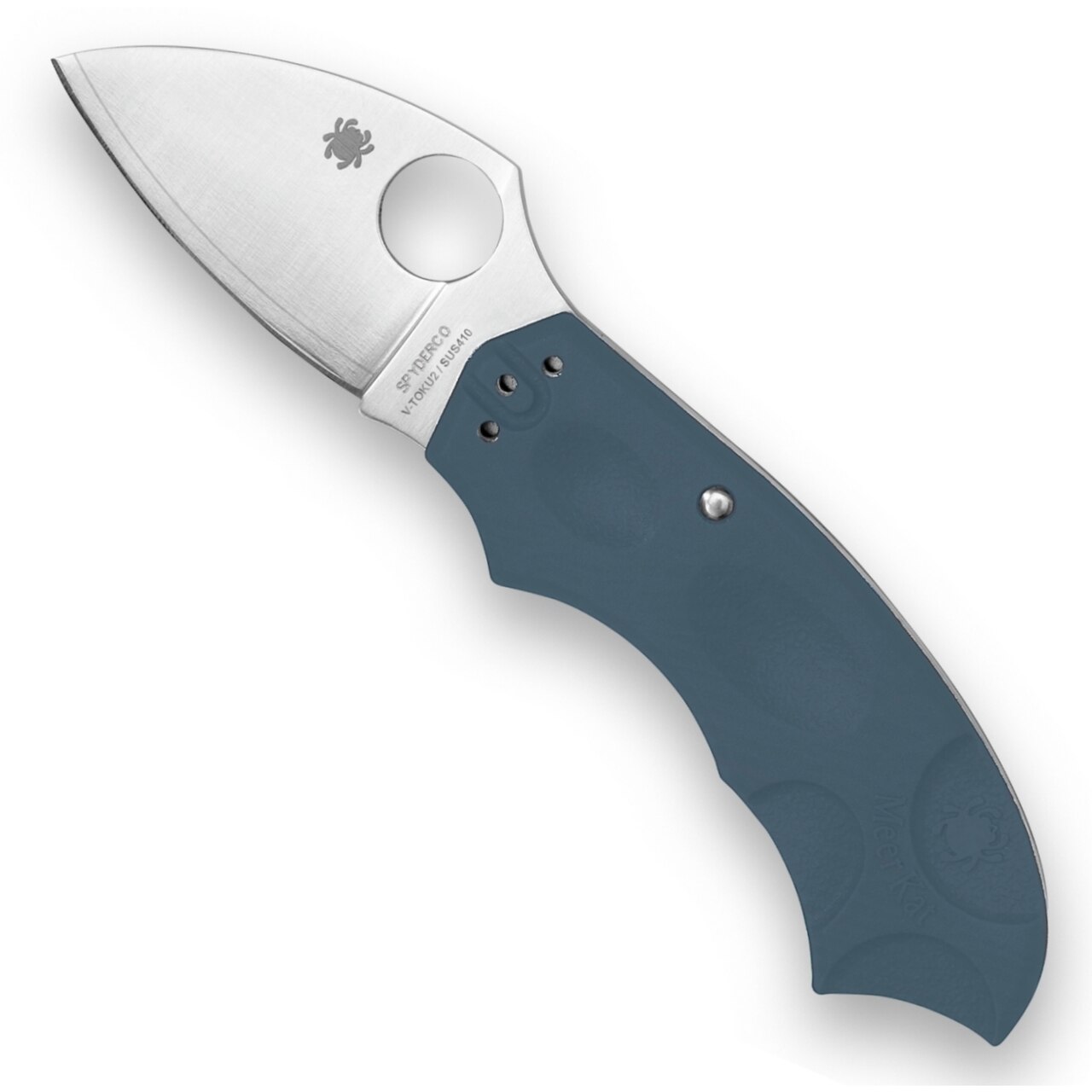 The handle on the Meerkat is made out of fiberglass-reinforced-nylon, or FRN, handle scales. These handle scales have been injection molded in the “signature blue gray color of this special series.”

FRN is a unique handle material because it is a fiberglass handle. It is similar to other fiberglass options, such as G-10, carbon fiber, or micarta. But, all of the fiberglass fibers are arranged haphazardly, which makes it nearly indestructible. This is how it differs from the other products. Because they have been arranged haphazardly, no matter which direction the handle is stressed in, it is not going to start to break apart. It is also not going to be brittle, like the other materials.

FRN is tough, durable, and incredibly lightweight. This is how the Meerkat’s weight is kept as low as it is.

The handle has a spine that curves from the blade to the butt. The belly has a slight finger guard that is there to protect your fingers from accidentally getting sliced on the uber-sharp steel. There is an elongated finger groove, that follows, and then a second smaller finger groove. These are there for comfort as well as grip. There are small half-circles that are indented. These are there to add the texture into the handle that the FRN cannot provide on its own.

This pocket clip is a wire clip that can only be attached for tip down carry, but it is reversible for either left or right handed carry. This is not a deep carry clip, but because of how small the knife is, it shouldn’t have an issue with staying securely inside of your pocket while you move about the day.

The tip down carry is the better way to carry the knife, because if it accidentally comes open inside of your pocket, when you reach inside of your pocket, it will not slice you. It is also a major advantage that it can be reversed for either left or right handed carry, so you can carry it in the way that is most comfortable, and thus, the safest to carry.

The wire clip adds a unique aesthetic as well as cutting down on weight very slightly. It is also a little bit more flexible and easier to work with. The clip is kept in place by three silver screws, which do match the rest of the hardware on the Meerkat.

This version of the Meerkat has been equipped with both the patented Round Hole as well as the Phantom Lock, which is rarer to find.

When they are talking about the Round Hole, they say, “One of the most common questions we get from people new to Spyderco knives is “Why the Round Hole?” The Round Hole allows the blade of a folding knife to be swiftly and easily opened with only one hand. This revolutionary feature was granted a U.S. utility patent in 1981 and literally helped define the form of the modern folding knife. Unlike thumb studs, disks, and other one-hand-opening attachments, the hole offers a larger surface area for greater reliability and does not interfere with the cutting action of the blade. An iconic symbol of our brand, the Trademark Round Hole™ also serves as a user-friendly alternative to a traditional nail nick in our two-hand-opening folders and a proud expression of our brand identity in our fixed-blade knives.” The Round Hole was one of the first things that made a Spyderco, a Spyderco. Not only does it symbolize their brand, it is easy to use, ambidextrous, reliable, and it does not get in the way like a thumb stud could. All in all, the Round Hole is so much more than just a Round Hole.

The Phantom Lock is one of the rarest knife locks to come across. It is completely hidden within its handle and the lock mechanism can lock the blade securely open. Spyderco says that the lock is released by pivoting the handle scales in opposite directions. This lock gives the Meerkat a unique function and aesthetic, because the lock is not going to be found very often.

When Spyderco is discussing this knife they say, “The Meerkat is a smaller scale, yet extremely capable folding knife with a secret—its unusual Phantom Lock mechanism. Completely hidden within its handle, this novel mechanism locks the blade securely open and is released by pivoting the handle scales in opposite directions. To make this special Sprint Run meerkat even more unique, it features a three-layer laminated blade a V-Toku2 core flanked by stainless steel outer layers. A Japanese steel made with Swedish iron ore, V-Toku2 is alloyed with tungsten, vanadium, and chromium and is renowned for its toughness at high hardness. Like all V-Toku2 Sprint Run models, this knife features fiberglass-reinforced-nylon (FRN) handle scales injection molded in the signature blue gray color of this special series.”

This knife is sold out and discontinued.